Pets in Space 5 feels like it’s right around the corner, with only six weeks to go before the release. That mean’s it’s time to introduce this year’s pet! Or make that pets, plural.

Inspired by a friend’s new kittens, this year’s story–Mitten’s Not Included–is returning to the smuggler crew on the Sentinel of Gems as they find themselves entrusted with a truly precious cargo, a trio of maine coon kittens. And here they are:

Austen, Bennet, and Collins (or more formally Lots 0511-A, B, and C) are precocious kittens smuggled onto the Sentinel by a runaway scientist, and they’re bringing a whole new set of headaches to ship’s doctor Layth Ali. Here’s the blurb:

Layth Ali thought he was happy. On board the Sentinel of Gems, he is allowed to run the medical bay as he sees fit, and the crew appreciates his talents. Most importantly, the smugglers don’t ask him questions about his past or pressure him to leave his self-imposed exile. But when a new passenger and her precious cargo get dumped in his lap, it’s all he can do to deflect her incessant questions and keep her at arm’s length.

Meja Aquarone knew she was courting trouble when she stole a litter of kittens from the lab where she worked, but she refused to allow their perceived flaw to become a death sentence. Now she’s on the run, hoping that the crew of the Sentinel can smuggle her someplace safe without her employers catching her. She wasn’t expecting to find someone on board who understood the tiny creatures or who shielded his compassion behind layers of armor, but ten minutes with the ship’s doctor leaves her curious to know more.

Forced to go to the one place he swore never to return, Layth feels the walls closing in around them. With a corporate bounty on their heads, and three cats becoming increasingly difficult to hide, Layth and Meja must decide what they’re willing to sacrifice to gain the safety they desire, and if that protection is worth being alone.

Preorder your copy of Pets in Space 5 from your favorite e-tailer at PetsinSpaceAntho.com 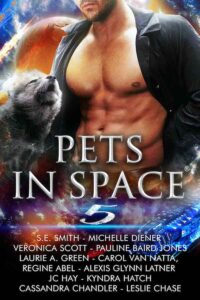