He wondered how early it was, or how late—the cabin was far enough north that daylight was short—but he resisted the urge to reach for an omni to check the time. Chen pressed against his back, her arm thrown possessively around his waist, her skin a welcome furnace in the cold cabin. Sometime in the night, Nujalik had climbed up onto the bed, and the wolf’s heavy body had pinned his feet beneath the covers. The quiet rasp of the umbra wolf’s snores was the loudest sound in the bedroom, but the contentment the scene inspired didn’t match the squirm of fear in his belly.

His family needed him, and he’d been indulging himself instead. He’d made plenty of excuses in his head, but even at the time, he’d known that’s all they were. He had to get to the port at Skyreach and get a shuttle to Khonsu first thing this morning. And pray it wasn’t too late.

Chen’s arm tightened around him as she kissed a trail over his shoulder. “How long have you been awake?”

“Yeah. She does that. I think she forgets how big she is.” Chen’s amused chuckle skated along his nerves, laced with a delicious huskiness. Her palm skimmed along the planes of his stomach, dipping lower. “I wonder what we could do that doesn’t involve leaving the bed?” 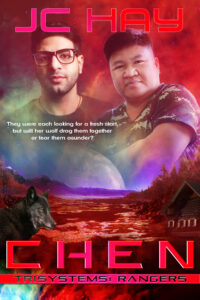